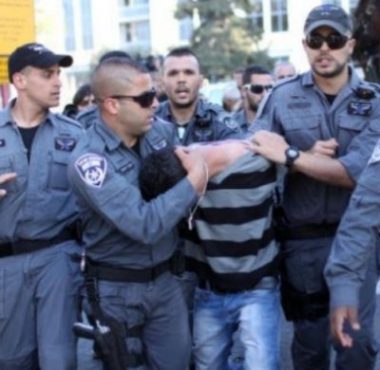 The Jerusalem office of the Palestinian President Society (PPS) has reported that the number of Palestinians, kidnapped by Israeli soldiers on Sunday at dawn, has arrived to eleven, including children.

The PPS said the army conducted extensive invasions into many homes in the Old City, Silwan and Abu Dis towns, and several others areas in the Jerusalem district, and kidnapped eleven Palestinians.

It identified the kidnapped Palestinians as:

Israeli soldiers have kidnapped, on Sunday at dawn, seven Palestinians, including three children, in different parts of occupied East Jerusalem.

The Jerusalem office of the Palestinian Prisoners Society (PPS) has reported that the soldiers kidnapped Maher Abu Sneina, from his home in Jerusalem’s Old City.

The PPS added that the soldiers searched and ransacked Abu Sneina’s home before abducting him. Abu Sneina works as a guard of the Al-Aqsa Mosque.

Amjad Abu Assab, the head of the Jerusalem Committee for Families of Detainees, has reported that the soldiers violently searched several homes in Silwan town, and kidnapped five Palestinians, including three children.

All of the kidnapped Palestinians were moved to the Al-Qashla detention center, before being transferred to the al-Maskobiyya detention and interrogation center, west of Jerusalem.

On Saturday evening, the soldiers invaded a number of homes in Batn al-Hawa neighborhood in Silwan, and attacked several Palestinians in addition to searching homes and property.

During the invasion, a number of youngsters hurled Molotov cocktails at an illegal settlement outpost, while the soldiers fired dozens of concussion grenades at random.

Also at dawn, the soldiers invaded several Palestinian areas in the southern West Bank district of Hebron, broke into and searched many homes, and kidnapped five Palestinians. The army also confiscated thousands of Shekels from a home in Sa’ir town.