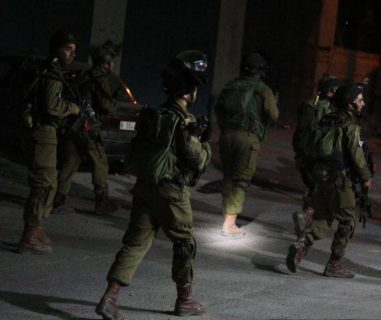 Israeli soldiers invaded, earlier on Thursday, several Palestinian cities and towns in different parts of the occupied West Bank, and kidnapped six Palestinians. The soldiers also attacked schoolchildren, near Bethlehem, and detained them.

The PPS added that the soldiers kidnapped a former political prisoner, identified as Monadel Sharqawi, from Jenin, in the northern part of the West Bank.

Furthermore, the soldiers attacked and detained several schoolchildren in Teqoua’ town, east of the West Bank city of Bethlehem.

The children were walking on the main road, in the center of the town, when the soldiers attacked and detained them. The Palestinian District Coordination Office (DCO), contacted its Israeli counterpart in an attempt to release the children.

In related news, the soldiers kidnapped a Palestinian woman, identified as Wi’am Lutfi Manasra, 50, while visiting her son, Osama Sallal, in Section Two of the Ramon Israeli prison.

Manasra is from Bani Neim town, east of Hebron; her son is serving a 17-year imprisonment term.