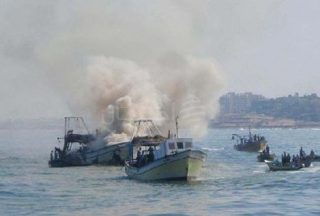 The Palestinian News & Info Agency (WAFA) has reported that the soldiers, stationed on military towers near the border fence, east of Khuza’a town, east of Khan Younis, fired many live rounds at the farmers forcing them out of their lands.

WAFA added that Israeli navy ships also fired many live rounds on Palestinian fishing boats, less than six nautical miles from the Gaza coast. The attack led to property damage; no injuries or arrests were reported.

The attacks are part of repeated Israeli violations against the Palestinians in the besieged, war-torn and improvised Gaza Strip.

They are carried out in direct violation of all previously-signed political agreements and cease-fire deals.