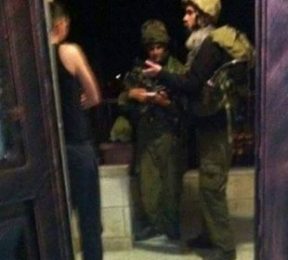 Israeli soldiers invaded, on Wednesday evening, the town of al-Khader, south of the West Bank city of Bethlehem, kidnapped a child, only 11 years of age, and refused to allow any member of his family to accompany him.

Ahmad Salah, coordinator of the Popular Committee against the Annexation Wall and Colonies in al-Khader, said the soldiers took the child to the District Coordination Office, near the western entrance of Beit Jala city.

Salah added that the soldiers have recently escalated their invasions into the town, and conducted frequent invasions and searches of homes, in addition to firing many gas bombs and concussion grenades.