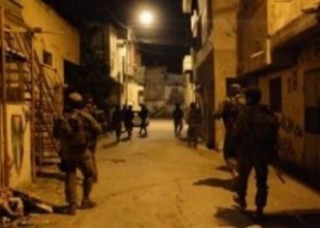 Israeli soldiers kidnapped, on Wednesday at dawn, two Palestinians in the northern West Bank district of Nablus, and in Jerusalem, after invading their homes and searching them.

The Nablus office of the Palestinian Prisoners Society (PPS) has reported that the soldiers invaded Tal village, southwest of Nablus, and kidnapped one Palestinian, identified as Fayez Abdul-Rahman Ramadan, 45.

In addition, the soldiers kidnapped a dentist from his home in Abu Dis town, southeast of occupied East Jerusalem, after breaking into his home and searching it.

The PPS said the kidnapped dentist has been identified as Samer Ayyad, and that the soldiers also invaded his clinic in the town, and violently searched it.

In relayed news, Israeli navy ships opened fire on Palestinian fishing boats, in Palestinian waters, in the northern part of the Gaza Strip, forcing them back to shore.