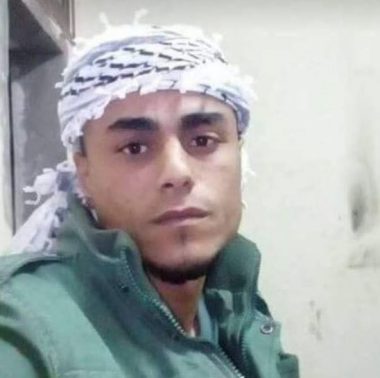 The Palestinian Prisoners’ Society (PPS) has reported that Israeli soldiers killed, on Tuesday at dawn, a young Palestinian man after abducting him from his home, and repeatedly assaulting him.

It quoted his brother stating that nearly 30 Israeli soldiers invaded the family home to abduct Mohammad, before continuously and repeatedly assaulting him in his home until he fell unconscious.

He added that the soldiers then took him brother to an unknown destination, and the family was later contacted by an Israeli intelligence officer, asking them whether Mohammad had any “preexisting conditions,” and they assured the officer that their son was completely healthy.

His mother said that the soldiers beat him on the head, then smashed his head several times against the wall until he fell down, unconscious. They handcuffed his prone body, then left the scene, leaving him unconscious and handcuffed with no medical attention.

On Tuesday morning, the Palestinian District Coordination Office was contacted by its Israeli counterpart, informing them that Mohammad was dead, without setting a date for transferring his corpse back to his family. 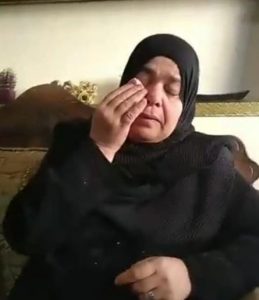 The family said the soldiers resorted to the excessive use of force against Mohammad, continuously beating him up while abducting him, and accused the military of executing their son.

They stated that the soldiers started beating Mohammad up immediately after breaking into his room, and continued to assault him until he lost consciousness before the soldiers carried him and left the building.

In a detailed statement Addameer said: “At around 4 in the morning, Israeli special forces entered the house. Following their arrival, a larger number of regular soldiers arrived as back up. After removing the door to the house, the soldiers attacked the individual’s mother and brought the members of the family into one part of the house. This included the mother, the father and three sons. The soldiers took Mohammad into a separate room, where he was beaten into an unconscious state. He was taken away from the house while in such a state, and taken to an unknown location. After two hours, his family was informed of their son’s death. It was added that the dead had been shot in the leg two years ago during clashes in the village.”

Mohammad was previously shot by the Israeli military two years ago, in the leg.

Addameer stated that, “Killing this young man, who posed no threat to the soldiers, violates international law”. The group added, “This lethal, excessive use of force is an extrajudicial assassination”. The group called on the United Nations to form a committee to investigate this and other crimes by the Israeli military.

The PPS held Israel fully responsible for killing Mohammad, and added that this crime is added “to a long lost of similar crimes and executions, carried out by the soldiers against Palestinian detainees.”

It added that the army has killed 217 Palestinian political prisoners, since Israel occupied the rest of Palestine in 1967.

The PPS stated that the silence of the international human rights organizations is granting Israel a green light to continue its crimes against the Palestinian people, especially since Israel continues to violate the basic rights of the Palestinians with impunity.

The PPS also said that approximately %95 of the Palestinians who are abducted and imprisoned by the Israeli army have been subjected to various forms of torture, during  their arrest, and during interrogation.

Furthermore, the PPS stated that Mohammad is the third Palestinian detainee to be killed by the army this tear, as the soldiers killed Yassin Saradeeh, 33, who was shot and beaten repeatedly while lying on the ground, on February 22nd,  in addition to Aziz ‘Oweisat, 53, who died on May 20, at an Israeli hospital from serious complications after he was assaulted by several soldiers in the prison, when they claimed he attacked an officer with a sharp object.