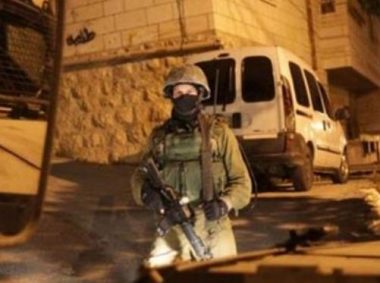 The Palestinian Prisoners’ Society (PPS) has reported that Israeli soldiers abducted, on Tuesday at dawn, eleven Palestinians, in several parts of the occupied West Bank.

The PPS stated that the soldiers abducted Rania Wajeeh Dweik, after stopping her at the Container roadblock, northeast of Bethlehem.

It added that the soldiers invaded and ransacked many homes in Hebron, in the southern part of the West Bank, and abducted Ahmad Mahmoud al-Qadi, Fadi Yousef Ghneimat and Bassam Mohammad Ismael.

The PPS also said that the soldiers abducted Samer Hamdi from his home in Nablus, in the northern part of the West Bank.

In addition, the soldiers abducted a former political prisoner, identified as Mohammad Abdul-Latif Sheebani, from his home in Jenin, in northern West Bank.

In related news, the soldiers killed a young Palestinian man after abducting him from his home, and repeatedly assaulting him, until he lost consciousness, and died from his wounds.

Furthermore, the Palestinian Health Ministry in Gaza has reported, late on Monday at night, that an Israeli war jet fired a missile at Palestinians, east of Khan Younis, in the southern part of the Gaza Strip, killing two young men.