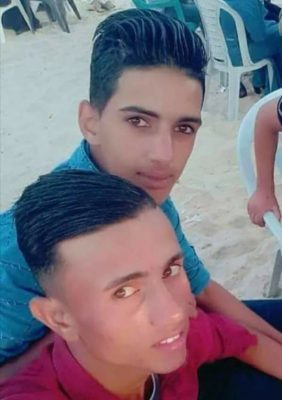 Updated: The Palestinian Health Ministry in Gaza has reported, late on Monday at night, that an Israeli war jet fired a missile at Palestinians, east of Khan Younis, in the southern part of the Gaza Strip, killing two young men.

Their bodies have been severely mutilated, and it took the Palestinian Health Ministry several hours to properly and officially identify them. ,

They have been identified as Naji Jamil Abu ‘Aasi, 18, and his cousin, Ala Ziad Abu ‘Aasi, 21.

The Health Ministry stated that the medics managed to reach the two Palestinians, near the perimeter fence in southern Gaza, and took them to Nasser Medical Center.

It is worth mentioning that the soldiers also fired dozens of live rounds, and flares, at Palestinian protesters, east of Rafah, and in Khuza’a town, east of Khan Younis, in southern Gaza.

In related news, several Palestinians managed to reach an Israeli army sniper post, across the border fence, and burnt it, while a number of fighters fired live rounds at an Israeli drone, east of Khuza’a.