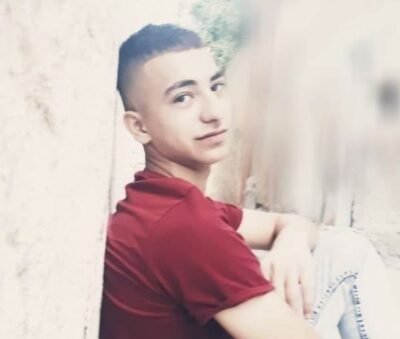 Update: The slain Palestinian has been officially identified as Karim Jamal al-Qawasmi, 19, from the at-Tour town, in occupied Jerusalem.

Dozens of Israeli soldiers, police, and intelligence officers invaded his home and ransacked the property before abducting his mother, and his brother Mohammad, in addition to summoning the father for interrogation.

Karim is also a former political prisoner, abducted when he was a teenager and was imprisoned for 18 months.

After killing the young man, the soldiers isolated the entire area and prevented the Palestinians from reaching the Al-Aqsa Mosque and many parts of the Old City. On Sunday at dawn, Israeli soldiers killed a young Palestinian man near Bab Hutta gate, north of the Al-Aqsa Mosque, in the occupied capital Jerusalem, in the West Bank.

Eyewitnesses said the soldiers shot the young man and left him bleeding without first aid until he succumbed to his wounds.

They added that the soldiers fired a barrage of live fire at the young men, and left him bleeding, before closing the entire area, including all gates leading to Al-Aqsa.

Haaretz quoted the Israeli police claiming that the Palestinian approached the officers at 4:30 at dawn, before pulling a knife and stabbing one of them, before the officers shot him.

However, it did not explain how the second officer was injured, but only said: “two officers were injured moderately during the attack.”

Dozens of soldiers and police officers were also sent to the area, and initiated extensive searches in the street and alleys, especially around Al-Aqsa.