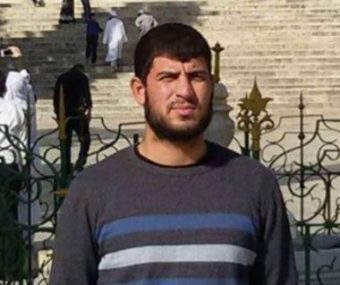 The Israeli army alleged that the young man, later identified as Ibrahim Mahmoud Matar, 25, “attacked and stabbed two soldiers before they shot him.”

Following the fatal shooting, the soldiers closed the entire area, while more units were deployed in the neighborhoods and alleys of the Old City.

Later, the soldiers invaded Jabal al-Mokabber neighborhood, southeast of Jerusalem, to break into the home of the slain Palestinian, in Eshqeirat area, and clashed with dozens of youngsters, who hurled stones on them, while the army fired gas bombs and concussion grenades.

Israeli daily, Haaretz, said the two injured officers suffered moderate wounds, and quoted the police stating that the Palestinian exited his car and “went into a post where the officers were stationed, and stabbed them.”

It added that the police struggled with the Palestinian, “before one of the two officers managed to overtake him, and shot him.”

Following the fatal shooting, the soldiers invaded the family homes of the slain Palestinian, and abducted his parents, and his uncle.