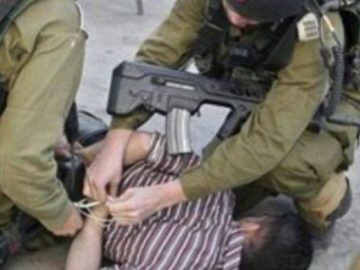 Israeli soldiers invaded, on Monday at dawn, Bani Neim and Beit Ummar towns, in the southern West Bank district of Hebron, searched homes and abducted two Palestinians, including a father of a child who was killed by the army last year.

Eid is the father of Issa Tarayra, 16, who, on September 20, 2016, was killed by Israeli army fire near Bani Neim town, after the soldiers claimed he “attempted to stab them, while eyewitness said the child was shot right after he stepped out of a Taxi that was stopped by the soldiers.

Mohammad Awad, the media coordinator of the Popular Committee in Beit Ummar, said the soldiers abducted his son from his home, and moved him to Etzion military base and detention center, north of Hebron.

He added that the abduction of his son brings the number of Palestinians from Beit Ummar, who have been abducted by the army this year, to 38.

It is worth mentioning that the soldiers installed roadblocks on roads leading to Sa’ir and Halhoul towns, and Hebron’s northern entrance, before stopping and searching dozens of cars, while inspecting the ID cards of the passengers, and interrogating many of them.