Israeli Soldiers Kill A Palestinian Woman In Her Home, In Jenin 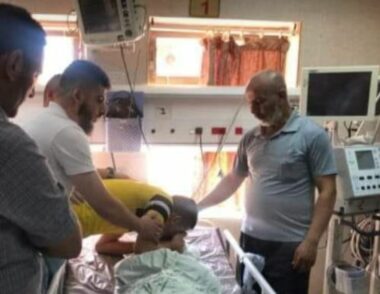 Dozens of Israeli soldiers invaded, on Friday at dawn, the northern West Bank city of Jenin, and fired many live rounds, gas bombs and concussion grenades at Palestinians protesting the invasion, and killed one woman with live rounds while she was in her home.

The Palestinian Health Ministry has reported that the woman was shot in the chest, before she was rushed to surgery at a hospital in Jenin, but succumbed to her serious wounds.

It added that the Israeli bullets damaged the woman’s liver, pancreas, and the Aorta, or main artery, inflicting serious wounds that led to her death despite all attempts to save her life. She has been identified as Dalia Ahmad Suleiman Sammoudi, 23, a mother of two children, including a newborn, and the wife of the Imam of the Abdullah Azzam Mosque in Jenin refugee camp.

The protests in the neighborhood started when the soldiers invaded the home of a former political prisoner, identified as Khaled Suleiman Abu Hasan, and interrogated him while ransacking the property. ed hurling stones at the invading soldiers and their army vehicles, and the military fired a barrage of live rounds at random, in addition to dozens of gas bombs and concussion grenades. Many Palestinians suffered the effects of teargas inhalation.

The Israeli army tried to justify the excessive use of force by claiming that some Palestinians fired live bullets at the soldiers, but the locals denied the allegation and confirmed that the protesters had no weapons, and only hurled stones and empty bottles at the invading army jeeps.

The occupation army also claimed that it “entered” Jenin overnight to conduct arrests, and that the soldiers “only fire d sponge-tipped bullets and teargas to disperse the protesters.”

The family of the slain woman said she woke up to feed her hungry newborn, and tried to close a window to prevent the tear-gas from seeping into her home, before she was shot with a live round in the chest.

A Palestinian ambulance rushed to the scene, but the soldiers fired several live rounds at it, delaying its arrival at the home of the seriously wounded woman. On Friday evening, hundreds of Palestinians participated in the funeral procession of the slain mother, starting in front of Khalil Suleiman Governmental hospital, heading to her home in the al-Jabriyyat area in Jenin city, before holding the funeral ceremony at the local mosque, and then buried her body in the graveyard of Jenin refugee camp.

It is worth mentioning that the Israeli soldiers also directly targeted a Palestinian ambulance of the Red Crescent Society with live fire; one of the bullets went through the ambulance, right between legs of one of the medics and exited from the other side.