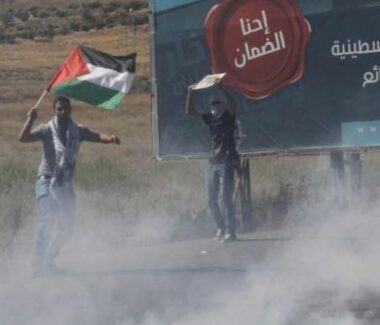 Israeli soldiers injured, Friday, many Palestinians near the al-Jalama military roadblock, northeast of Jenin, in northern West Bank, after the army attacked protesters marching to condemn the fatal shooting of a Palestinian woman, who was killed by army fire while in her home.

The Palestinians were marching near the military roadblock, carrying Palestinian flags and posters, and chanting against the ongoing Israeli occupation, violations, and escalation against the civilians.

The soldiers instantly started firing a barrage of gas bombs and concussion grenades, in addition to many rubber-coated steel bullets.

Medical sources said many Palestinians were injured, mainly due to the severe effects of teargas inhalation, in addition to suffering cuts and bruises.

On Friday at dawn, the soldiers invaded the northern West Bank city of Jenin, and fired many live rounds, gas bombs and concussion grenades at Palestinians protesting the invasion, and killed one woman with a live round in the chest, while she was in her home.

The slain woman has been identified as Dalia Ahmad Suleiman Sammoudi, 34, a mother of two children, including a newborn, and the wife of the Imam of the Abdullah Azzam Mosque in Jenin refugee camp.