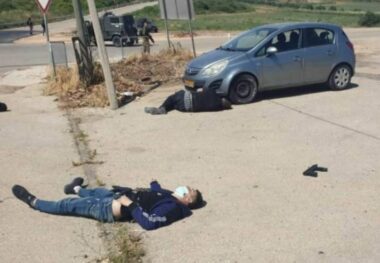 Israeli soldiers killed, on Friday morning, two Palestinians, and seriously injured a third, near the Salem Israeli military roadblock, close to the northern West Bank city of Jenin; the army claimed the Palestinians fired live rounds at the soldiers and were killed in the ensuing exchange of fire.

The two were identified as Abdullah Di’bas and Mohammad Ayman Fanni, from Tulkarem refugee camp. The two were killed and a third Palestinian was injured, after they reportedly fired live rounds at soldiers at the Salem military base, west of Jenin.

Israeli media sources said the exchange of fire took place at a bus stop near the Salem colonialist outpost, outside the Salem military base.

They added that the Palestinians allegedly used improvised Carl Gustave rifles (known as Carlo) in the attack, before they were shot and killed, and stated that the incident did not lead to injuries among the soldiers.

Following the shooting, Palestinian ambulances rushed to the scene, but the soldiers did not allow them to reach the Palestinians.

Israeli Ynet News said two of the Palestinians were instantly killed during the exchange of fire, and one was injured before he was taken to the HaEmek hospital in Afula, where his condition has been described as very serious.

It is worth mentioning that some Israeli media agencies said the three Palestinians were shot dead.

Following the fatal shooting, the soldiers closed the entire area, forced the Palestinians away, and attacked Palestinian journalists.

Israeli military analysts said the shooting could just be the start of a serious escalation in the West Bank, including Jerusalem, and added that the shooting seems to have been carried out by a small cell, however, could be the start for more escalation especially amidst the increasing tension in Jerusalem.