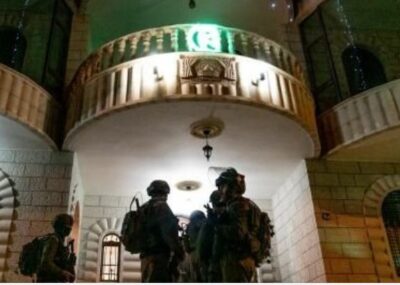 A large military force invaded, on Friday at dawn, Turmus Ayya town, north of the central West Bank city of Ramallah, before storming the home of a Palestinian detainee, suspected of killing an Israeli settler, last Sunday, and took measurements of the property in preparation for demolishing it.

Media sources said the soldiers surrounded the home of Montaser Shalabi, 47, who is believed to be behind the fatal shooting that led to the death of an Israeli colonialist settler, identified as Yehuda Guetta, 19, and detained his entire family in one room, before ransacking the property and taking measurements in preparation for detonating it.

During the invasion, the soldiers fired many live rounds, rubber-coated steel bullets, gas bombs, and concussion grenades at Palestinian protesters. In a statement, the Israeli army said it conducted the invasion into Turmus Ayya to take the needed measurement of the family home of the Palestinian who carried the shooting out, also leading to the injury of two setters.

It is worth mentioning that Shalabi was taken prisoner two days ago during an Israeli invasion into Silwad town, northeast of Ramallah. The Israeli army said Shalabi was mildly injured by army fire during the invasion.

The army and Israel’s Intelligence Agency said Shalabi is not a member of any Palestinian faction, and that he was moved to an interrogation center run by the Shabak.

It is worth mentioning that Shalabi is a father of seven children, and is also a bearer of American citizenship. The Israeli Security Agency said the Shalabi comes from one of the wealthiest families in Ramallah.