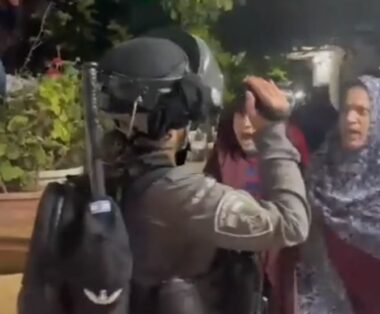 Israeli colonialist settlers and police officers attacked and injured, on Thursday at night, three Palestinians, including one who was assaulted with sharp tools, near Sheikh Jarrah Palestinian neighborhood, in the occupied Palestinian capital, Jerusalem.

Eyewitnesses said the colonists assaulted a young man, identified as Najm Qteina, with sharp tools in addition to punching and kicking him, while he was heading back home from his work near Sheikh Jarrah.

The man suffered various cuts and bruises and was moved to a local hospital for treatment.

The colonists also assaulted another young man, identified as Nimir Khaddour while walking in Jerusalem, causing various injuries before he was rushed to a hospital. Khaddour is from Biddu village, northeast of Jerusalem.

In addition, Israeli police officers invaded the home of Saleh Thiab in Sheikh Jarrah and assaulted him and his family.

Saleh suffered cuts and bruises and was moved to a hospital for treatment, while his families received the needed medical attention in their home.