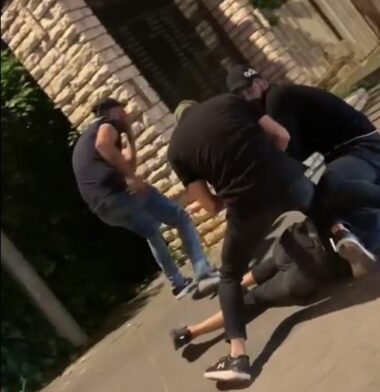 Israeli soldiers and illegal colonialist settlers attacked on Thursday night, many Palestinians in Sheikh Jarrah neighborhood, in the occupied Palestinian capital, Jerusalem, while the army also abducted more than ten Palestinians, in addition to invading homes and assaulting families.

The soldiers assaulted dozens of Palestinians who participated in a group Iftar in solidarity with the families of Sheikh Jarrah who are threatened with expulsion from their homes for the benefit of the illegal colonialist settlers.

During the attack, the soldiers abducted at least ten Palestinians, including the Secretary of Fateh movement in Jerusalem, Shadi Mitwer, in addition to Shadi Kharouf, Islam Gheith, Nour Shalabi, Adam, and his brother Bashar Ya’ish.

Undercover soldiers also kidnapped a young man, identified as Ahmad Dirbas, and took him to an unknown destination.

Israeli colonialist settlers also attacked the Palestinians in Sheikh Jarrah, tried to force families out of their homes, in addition to assaulting the Palestinians just as Iftar began for the Muslims who are fasting every day, during the holy month of Ramadan.

Eyewitnesses said the colonist was hiding behind a building in the neighborhood when he fired the live rounds, shortly after the soldiers assaulted the Palestinians and abducted many of them. The Israeli army also closed the neighborhood to prevent Palestinians and solidarity activists from reaching it, and fired many rubber-coated steel bullets and gas bombs.

Furthermore, the soldiers broke into two homes, owned by Palestinians from Diab and al-Kurd families, and assaulted them, causing several injuries.

It is worth mentioning that the indigenous Palestinian families in Sheikh Jarrah refused proposals for a compromise with the illegal colonialist settlers regarding the ownership of their homes and lands, and informed the Israeli courts that they will remain steadfast in defense of their property, and their existence in their neighborhood.

The families also filed a new appeal with an Israeli court after submitting new documents proving their ownership of their homes and lands, prompting a decision from the Israeli Supreme Court to hold a hearing on May 10, 2021.

In related news, a Palestinian man, identified as Mahmoud Hussein Hamamda, was injured after Israeli colonists attacked him while he was heading back home in the al-Mafqara area in Masafer Yatta, south of Hebron, in the southern part of the occupied West Bank.