Israeli Soldiers Killed Four Palestinians, Including A Child, Injured 729, In Gaza On Friday 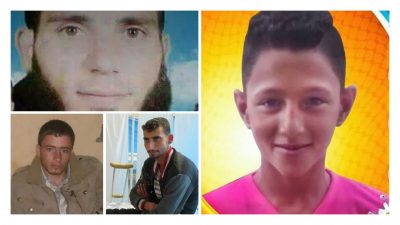 The Palestinian Health Ministry has confirmed that Israeli soldiers shot and killed, Friday, four Palestinians, including one child, and injured more than 729, including 24 children and twelve women, after the army resorted to the excessive use of force against protesters, on their lands, near the border fence, in the besieged Gaza Strip.

The Ministry said the soldiers killed a child, identified as Mohammad Ibrahim Ayyoub, 15, from Jabalia in northern Gaza, after shooting him with an expanding bullet in the head.

It added that the soldiers also killed Ahmad Rashad al-Athamna, 24, from Beit Hanoun, in the northern part of the Gaza Strip, after shooting him with a live round in his neck, east of nearby Jabalia.

The soldiers also killed Ahmad Nabil Aqel, 25, after shooting him with an expanding bullet in the head, east of Jabalia, in northern Gaza. He was first shot in his leg, received the needed treatment, and returned to the protests, before being killed by Israeli army fire.

In addition, the soldiers killed Sa’ad Abdul-Majid Abu Taha, 29, from al-Qarara town, northeast of the southern Gaza Strip city of Khan Younis, after shooting him with a live round in his neck.

The Health Ministry also stated that the soldiers shot more than 729 Palestinians, including 174 who were rushed to local hospitals, and at least three who suffered life-threatening wounds, and 271 who received treatment in make-shift field clinics. 156 of the wounded were shot with live fire.

One of the wounded is a medic, who suffered a very serious injury, in addition to two journalists. Ninety Palestinians suffered moderate wounds. The Ministry stated that eighteen of the wounded Palestinians were shot in the neck and head, 26 in the chest and back, twelve in the pelvis and abdomen, and 154 were shot in their legs.

Furthermore, eighty-six Palestinians suffered the effects of teargas inhalation; 29 were injured by shrapnel; five were shot with rubber-coated steel bullets and 29 sustained cuts and bruises. He called on the International Community to provide the urgently-needed protection to the Palestinian people, facing serious Israeli military escalation and crimes, and urging them to oblige Israel to respect International Law and the Four Geneva Convention.

The Palestinian official said that peace and security around the world start with justice, and implementing International Law, by holding those who violate it accountable for their crimes.

“For the fourth consecutive week, Israel continues the excessive and lethal use of force against Palestinians participating in the nonviolent Great March of Return, especially in the Gaza Strip,” Mansour said, “Israel is shooting Palestinian women, children and the elderly, and is escalating its violations against them. These serious violations must stop; Israel should not be allowed to continue its breaches on International Law and the Fourth Geneva Convention.”