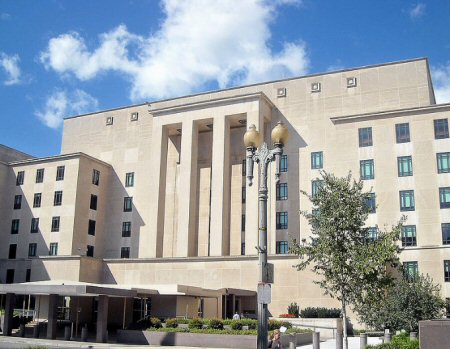 The US State Department has dropped, from its annual human rights report released on Friday, the term “Occupied Territories” when making reference to the West Bank, East Jerusalem and Gaza, according to the Washington-based Institute for Middle East Understanding (IMEU), which it said is a major shift in US foreign policy towards Israel and the Palestinians.

Yousef Munayyer, political analyst at the Arab Center of Washington, DC, executive director of the US Campaign for Palestinian Rights, described the State Department’s omission of the term ‘occupied territories’ in their human rights report covering the West Bank and Gaza as “a new low.”

“How is it possible to even understand the human rights obligations of actors on the ground when the framework of occupation, for which international humanitarian law clearly delineates rights and responsibilities, is discarded?” he asked.

“Perhaps, however, this is a clarifying moment. If the territories are not occupied, what will the State Department tell us their status is? Are they prepared to acknowledge the Apartheid reality that Israel has established on the ground? They may have just unintentionally done so.”

“Apparently, Israeli soldiers, checkpoints, a thirty-foot high concrete separation barrier weaving in and out of the West Bank around fortified illegal Jewish settlements are not evidence enough to the Trump Administration that a military occupation over Palestinians exists, one that includes forced population transfer in violation of the Fourth Geneva Convention,” she said.

“It appears that US Ambassador David Friedman’s personal and financial ties to illegal Israeli settlements in the occupied territories are influencing the direction of US foreign policy in Israel/Palestine away from the US national interest and international peace and security toward that of Israel’s extreme right wing.  This is uncharted territory and one that is incredibly dangerous for all involved in the region and beyond.”

Noura Erakat, Human rights attorney and Assistant Professor at George Mason University, said the State Department’s act was “yet another nail in the coffin of the two-state solution and a major step towards making permanent the apartheid regime Israel has implemented in the territories it controls between the Jordan River and the Mediterranean Sea, in which millions of Palestinians are treated as second class citizens inside Israel and denied even the most basic of rights in the occupied territories, simply because they are not Jewish.”

In related news, Secretary General of the Palestine Liberation Organization (PLO), Saeb Erekat, on Saturday, said that the United States administration has already started executing the “deal of the century” by recognizing Jerusalem as capital of Israel.

Speaking at a press conference in Ramallah, Erekat said the US administration has no longer been a partner and sponsor of peace since US President Donald Trump’s recognition of Jerusalem as Israel’s capital.

He called on the countries of the world, especially the member countries of the United Nations, not to comply with the US pressure to relocate their embassies from Tel Aviv to Jerusalem, since East Jerusalem is an occupied territory under international law.

“The threatening and extortion practiced by the Trump administration comes in defense of the grave violations committed by Israel against international law and international legitimacy, leading the region to chaos and violence,” Erekat remarked.