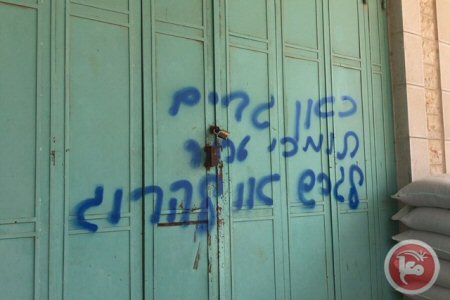 Israeli settlers raided a Palestinian town in the central occupied West Bank district of Ramallah before dawn, on Friday, puncturing the tires of several vehicles and spraying racist, anti-Arab graffiti across the town.

Residents of the town of Burqa, east of Ramallah, told Ma’an News Agency that they woke up to find that settlers from the nearby Migron settlement — which was illegally built on lands of the village — had punctured the tires of dozens of vehicles in the town.

Settlers also sprayed racist graffiti on cars and the walls of homes.
Palestinian activists and rights groups have long accused Israel of fostering a “culture of impunity” for Israelis committing violent acts against Palestinians.

Better known as “price tag” attacks, extremist Israeli settlers use violent acts of retribution on Palestinians and their property to demonstrate their opposition to Israeli restrictions on settlements and their outposts in the occupied West Bank.

In March 2017, Israeli NGO Yesh Din revealed that Israeli authorities served indictments in only 8.2 percent of cases of Israeli settlers committing anti-Palestinian crimes in the occupied West Bank in the past three years.