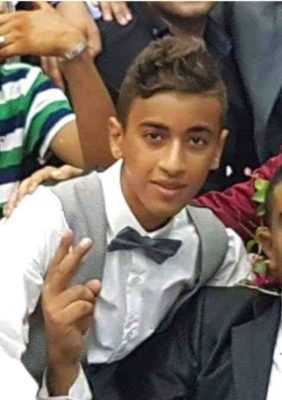 Israeli soldiers killed, on Wednesday night, a Palestinian child from Rafah, in the southern part of the Gaza Strip, and injured many Palestinians in several parts of the coastal region.

The Health Ministry in Gaza said the soldiers killed Mo’men Ibrahim Abu Eyada, 15, from Rafah, after shooting him with a live round in the head, east of the city.

According to Israeli Ynet News, the army said they “had no knowledge of any casualties or any live fire used by the soldiers,” and added that “only a very few officials were available for comments, because Israel was marking the Yom Kippur fast day.”

Furthermore, the soldiers fired dozens of live rounds, and high-velocity gas bombs, at Palestinian protesters near the perimeter fence, east of Deir al-Balah, in central Gaza, wounding six Palestinians with live fire, and causing many to suffer the effects of teargas inhalation.

The two Palestinians were rushed to the Al-Aqsa Hospital in Deir al-Balah, while the medics provided the needed treatment to scores of Palestinians who suffered the effects of teargas inhalation, in addition to various cuts and bruises.

In addition, the soldiers attacked many protesters on Palestinian lands near Kissufim military base, northeast of Khan Younis, in southern Gaza, moderate wounding eight after shooting them with live fire, and causing many to suffer the effects of teargas inhalation.

Also on Wednesday, the soldiers abducted two young Palestinian men after they crossed the perimeter fence, in southern Gaza, and moved them to an interrogation facility.

The army said dozens of Palestinians “breached the fence from several parts of the Gaza Strip, and managed to return to the coastal region.”

On Tuesday, the soldiers killed four Palestinians, at dawn and during evening hours, east of Khan Younis, and near Beit Hanoun (Erez) Terminal in northern Gaza, and injured dozens of residents with live fire, in addition firing many gas bombs and concussion grenades causing many to suffer the effects of teargas inhalation.

The Health ministry in Gaza said Ahmad Omar and Mohammad Abu Naji, were killed on Tuesday evening, by Israeli army sharpshooters during a protest, against cutting UNRWA funding, near Eretz (Beit Hanoun) Crossing, in northern Gaza.

It added that Naji and Ala’ were killed at dawn, after an Israeli war jet fired a missile at them, east of Khan Younis.

Also on Tuesday, the soldiers killed Mohammad Yousef Sha’ban Oleyyan, 26, in the al-Misrara area, in occupied East Jerusalem, after he reportedly attempted to stab soldiers, and Mohammad Zaghloul al-Khatib, 24, was beaten to death by Israeli soldiers who invaded his home, in Beit Rima town northwest of Ramallah, in central West Bank, while he was sleeping at dawn.