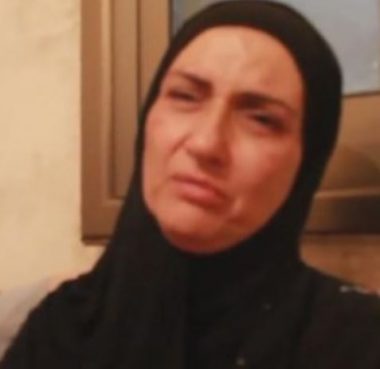 Israeli soldiers shot and killed, on Thursday evening, a Palestinian woman in Bab al-‘Amoud area, in occupied East Jerusalem, after the army claimed she “carried scissors” and attempted to attack the soldiers.

Palestinian medical sources said the woman, identified as Seham Rateb Nimir, 49, from Shu’fat refugee camp, north of jerusalem, is the mother on Mustafa Nimir, who was killed by the army on Monday, September 5th 2016.

After killing the woman, the soldiers abducted one of her daughters, who was with her, and took her to an unknown destination.

Palestinians who saw the fatal shooting of the woman said she wasn’t carrying any weapons, and did not attempt to attack the soldiers, and that the only thing they saw on the ground, after she was shot, was a small scissor.

Her brother-in-law said it remains unclear what the argument was about, but the soldiers, who are always heavily deployed in at the entrance of Bab al-‘Amoud area, were fast and careless in using their weapons.

“We don’t exactly know what happened, but even if she posed any threat, the soldiers could have easily controlled her, without using their weapons, especially the fatal shots,” he stated, “We still do not know where the soldiers took her daughter to.”

Eyewitnesses the stabbing attack allegations, and said that the soldiers also left the woman bleeding until she died. When her son, Mustafa, was killed last year, in Shu’fat refugee camp, north of Jerusalem, the soldiers claimed they thought his cousin, Ali Nimir, who was driving the car, was trying to carry out a ramming attack, before shooting and injuring him, and killing Mustafa.

The army then retracted the ramming attack allegations, and arrested the driver before charging him with “negligent homicide,” explaining the charges by claiming that “his reckless driving caused the soldiers to open fire at the car.”