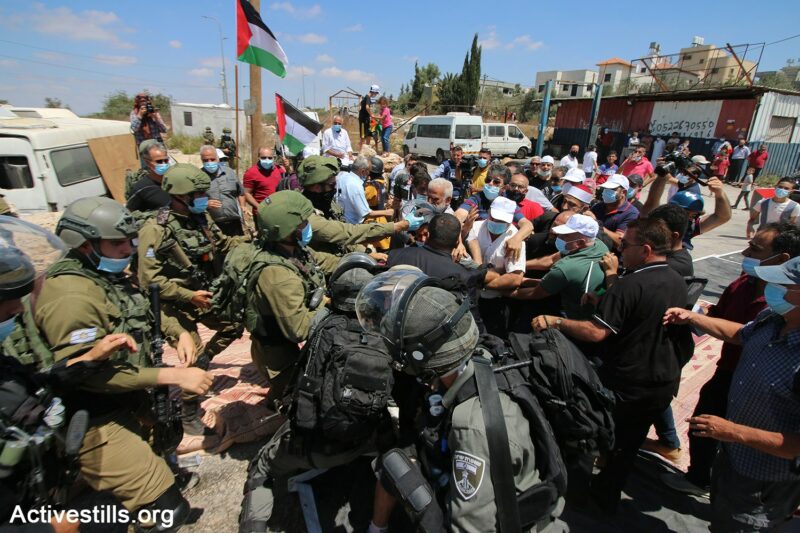 The Israeli army prevented, on Friday, Palestinians from holding prayers on the citizen-owned lands of Kifl Hares, in the northern West Bank, which is under threat of confiscation by the Israeli occupation, the Wall Resistance Commission reported.

Occupation soldiers attacked the participants with pepper-spray as they attempted to pass through the military roadblock. The army then erected flying roadblocks, closing the main entrance of Kifl Hares, which forced the citizens to perform the prayers at the village entrance.

Photos: Sharona Weiss & Haidi Motola / Activestills
[Palestinians hold a weekly protest against Israeli occupation and colonization in the West Bank village of Hares. The Israeli army closed the gate to the village preventing the protesters from reaching their land.]

Member of the Fatah movement, Ayman Ibdah said, “we will continue until our goal is achieved,” affirming that the Palestinian people will remain attached to their land.

Palestinian Liberation Organization (PLO) representative, Naeem Harb said, “Our participation today is a message that we cling to our land and our struggle until the defeat and the end of the occupation. These are our lands and in no way can we give them away.”

In related news, Palestinian youths in the southern West Bank city of Hebron, on Friday, confronted the fully armed Israeli army. It is unknown if there were any injuries but below is a video of several Israeli soldiers transferring a presumably injured person onto a stretcher. The identity, location and condition of the injured person are unknown at the time of this report.