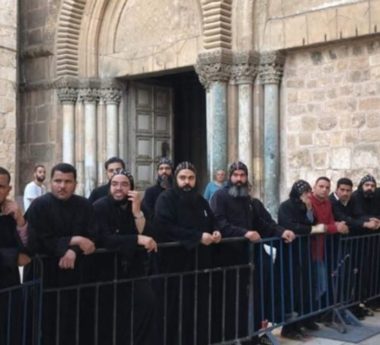 Israeli soldiers and police officers attacked, on Wednesday morning, several Coptic Christian priests in the Church of the Holy Sepulchre, in occupied Jerusalem and abducted one of them, the Maan News Agency has reported.

The attack took place after the Coptic Church in occupied Jerusalem organized a peaceful protest near Deir es-Sultan Monastery, located on the roof of the Church of the Holy Sepulchre, rejecting an Israeli decision denying the church the right to conduct the needed renovation work inside the holy site.

This is happening while workers of the City Council are conducting unauthorized renovation work, without the approval of the Coptic Church,

Eyewitnesses said the Israeli soldiers and police officers surrounded the protesting priests, before assaulting and pushing them with excessive use of force, causing several injuries.

They added that the police forcibly removed the priests, and abducted one of them, before allowing the City Council workers into the holy site.