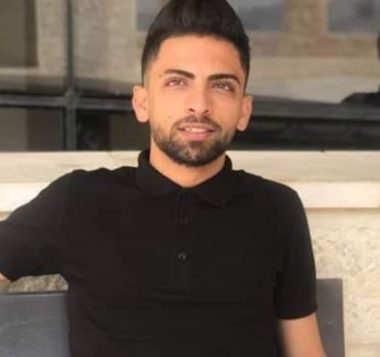 Israeli soldiers killed, on Wednesday at dawn, a young Palestinian man in Tammoun town, and injured eleven others, east of Tubas, in northeastern West Bank.

Medial sources said the young man, identified as Mohammad Mahmoud Bisharat, 21, was shot with a live round in the back, and died from his wounds shortly afterwards.

The Palestinian was studying Health and Hospital Management at the Al-Quds Open University, Nablus Branch, in northern West Bank.

Many Palestinian protested the militate invasion into their town, and hurled stones, in addition to using fireworks, targeting the invasion armored military jeeps.

The soldiers fired many live rounds, in addition to gas bombs, concussion grenades and rubber-coated steel bullets at the protesters.

Medical sources said the soldiers shot three Palestinians with live fire, including one who suffered a moderate-to-severe wound, and three others with rubber-coated steel bullets, while at least five Palestinians suffered the effects of teargas inhalation.