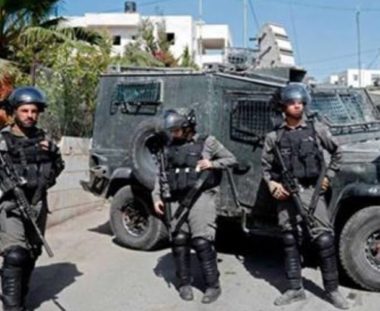 Israeli soldiers invaded Dahiat al-Barid area, south of the ar-Ram town, northeast of occupied East Jerusalem, surrounded the building of the Palestinian Governorate and Jerusalem Affairs Ministry, and prevented the employees from entering or leaving it.

The WAFA Palestinian News Agency said the soldiers, and police officers, encircled the entire area, and invaded many surrounding buildings before occupying their rooftops to use them as monitoring posts.

It added that the soldiers photographed the governorate building from several directions, before withdrawing from the area.

Last Sunday, the army abducted Jerusalem Governor Adnan Gheith, and the head of the Intelligence Services in the Palestinian suburbs of East Jerusalem, Lieutenant Jihad al-Faqeeh, and released them on Monday.

Israel is ongoing with its attempt to prevent the Palestinians from having any control over their towns and communities in occupied Jerusalem, and is also targeting UNRWA-run facilities, including schools and clinics, to prevent it from providing services to the Palestinian refugees.

Related: UNRWA Expresses Concern Over Statements Made by Mayor of Jerusalem