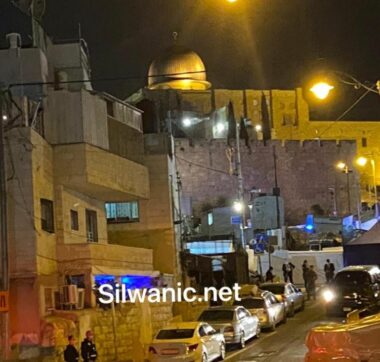 The Wadi Hilweh Information Center in Silwan (Silwanic) has reported that the soldiers closed the neighborhood, and assaulted many residents, to facilitate the American delegation’s visit into the illegal colony dubbed as “The City Of David,” which was installed on Palestinian lands.

Silwanic stated that the soldiers and police officers were heavily deployed in the neighborhood, and several parts of the town, in addition to installing police barricades, preventing dozens of Palestinians from entering their neighborhoods and homes near the colonialist outpost.

Many soldiers, including sharpshooters, invaded Palestinian homes and occupied their rooftops, to use them as monitoring towers, while earlier in the day, the soldiers also installed tents.

The Palestinians complained that, while the American officials were visiting an illegal colonialist outpost in their town, the natives of the town were not only assaulted and searched but were also not allowed to enter or leave their neighborhoods and homes.

It is worth mentioning that the soldiers also assaulted and abducted, two young Palestinian men in the ath-Thoury neighborhood, in occupied East Jerusalem.