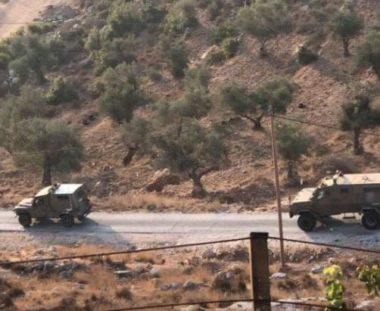 The Palestinian Prisoners’ Society (PPS) has reported that Israeli soldiers shot a child, and abducted thirteen Palestinians, after the army invaded many communities, in several parts of the occupied West Bank, on Monday at dawn and during morning hours.

Media sources in Ramallah, in central West Bank, said several army jeeps invaded Beit Rima town, northwest of the city, and shot a Palestinian child with a rubber-coated steel bullet in his neck, after the army attacked local youngsters, protesting the morning invasion into their town.

They added that the soldiers also invaded and ransacked several homes in the town and occupied rooftops.

The soldiers also abducted three children, who remained unidentified at the time of this report, while they were walking to their schools.

Furthermore, the soldiers abducted a former political prisoner, identified as Mahmoud Mohammad Shorti, from his home in the al-Mazra’a ash-Sharqiya village, northeast of Ramallah, after invading his home and searching it.

In Jenin in norther northern West Bank, the soldiers abducted Amin Zakarna and Ahmad Yousef Kamil, from their homes in Qabatia town, south of Jenin.

The soldiers also abducted one Palestinian, identified as Malek Eshteyya, from his home in Tal village, west of the northern West Bank city of Nablus.

In Hebron city, in southern West Bank, the soldiers abducted Emad Nairoukh, in addition to Laith Yousef Asafra and Mohammad Jihad Asafra, from their homes in Beit Kahil town, west of the city.

The soldiers also invaded many neighborhoods in Hebron city, and searched homes, in addition to installing roadblocks in Jouret Bahlas area, in its northern part, in addition to the entrances of Halhoul and Sa’ir towns, north and northeast of the city, before stopping and searching dozens of cars, and interrogated scores of Palestinians while inspecting their ID cards.