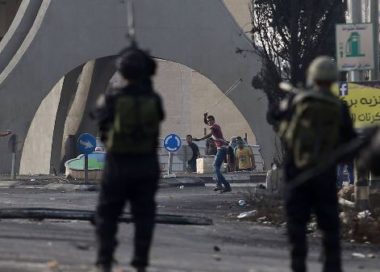 Israeli soldiers shot and seriously injured, on Monday afternoon, a young man, near the central West Bank city of Ramallah, after the army attacked youngsters protesting the death of a Palestinian detainee in Israeli prison.

The Palestinian was seriously injured by Israeli army fire, north of al-Biereh city, and was rushed to Palestine Medical Complex, in Ramallah, suffering a life-threatening injury, before he was admitted to surgery.

The soldiers also shot a journalist, identified as Abdul-Rahman Younis, while documenting the protests.

The Israeli attacks took place when dozens of students of Birzeit University marched towards the northern entrance of Ramallah, protesting the death of a detainee, identified as Bassam as-Sayeh, 47, from Nablus, who was diagnosed with bone cancer in 2011, and Leukemia in 2013, but did not receive the needed specialized medical treatment in Israeli prisons.