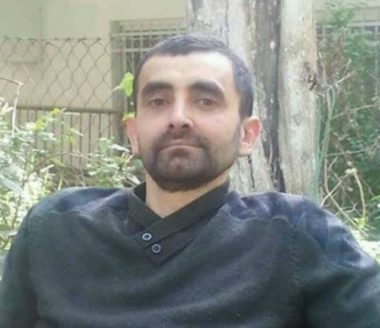 Cancer-stricken Palestinian prisoner Bassam al-Sayyeh, from the northern West Bank district of Nablus, died today in an Israeli prison, due to medical negligence, said the Palestinian Detainees and Ex-Detainees Commission.

The commission held the Israeli government fully responsible for the racist crimes committed against Palestinians, including the physical and psychological torture and medical negligence of prisoners, among other violations, calling for an investigation into these crimes.

His wife, a former political prisoner, identified as Mona Hayes, said that she has been barred from visiting him for the last two years.

She added that he started suffering from various serious health conditions four years ago and never received specialized medical care, and over the past year, Bassam suffered serious health issues, and was hospitalized in Israel hospitals, then to Ramla hospital.

His latest setback resulted in clinical death due to renal failure and Kidney failure, due to the lack of adequate and profession medical treatment.

The Palestine News Network (PNN) has reported that the detainee also”received chemotherapy by incompetent physicians and lost his life due to pulmonary edema, cirrhosis and cardiac failure.”

His lawyer tried to get Israeli courts to release him so that he can receive specialized medical care in Palestine or abroad, but all appeals were denied.

Former political prisoner, Khader Adnan from Arraba near the northern West Bank city of Jenin, who held extended hunger strike while in Israeli prisons and faced near death conditions, said the death of Sayeh requires real solidarity and action to expose the Israeli crimes against the detainees, and the seriously escalating violations, and warned that without such an action, this death will not be the last. The death of al-Sayyeh brings the number of Palestinian prisoners who died in Israeli jails since 1967 to 221 prisoners.

At least 700 Palestinian prisoners in Israeli jails suffer from serious health conditions, 160 of whom are in need of urgent medical follow-up.

Palestinians have accused the Israeli authorities of failing to provide proper medical treatment, or of delaying treatment to ill prisoners, causing a deterioration in their health.

According to Addameer Prisoners Support and Human Rights organization, “in regard to adequate medical attention and treatment, Article 91 [of the Fourth Geneva Convention] emphasizes that “every place of internment shall have an adequate infirmary…” and that “Internees may not be prevented from presenting themselves to the medical authority for examination.”

In addition to this article, Article 92 asserts that “Medical inspections of internees shall be made at least once a month…”. It is evident that the withholding of treatment, or access to a medical professional, is a violation of these specific provisions, and therefore a violation of international humanitarian law.”