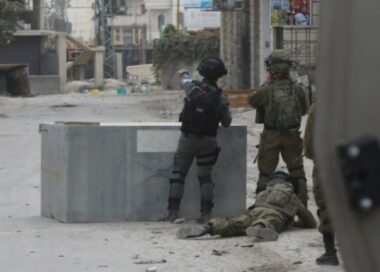 On Wednesday evening, Israeli soldiers shot a Palestinian child in the Al-Arroub refugee camp, north of Hebron, in the southern part of the occupied West Bank.

They said the soldiers shot a child, 17, with a live round in the leg, causing moderate wounds before the medics rushed him to a hospital in Hebron.

In related news, the soldiers abducted Raed Abul-Hamid Radwan, 28, and Abdul-Qader Mohammad Sweidan, 18, from Azzoun town, east of the northern West Bank city of Qalqilia, while working at a construction site.