Updated: Israeli Soldiers Shoot A Journalist And A Medic In Nablus 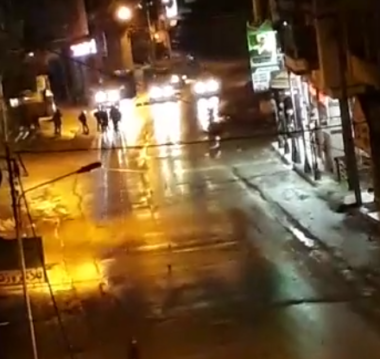 Dozens of Israeli soldiers invaded the northern West Bank city of Nablus on Thursday at dawn, shot one journalist and one medic, and caused many residents to suffer the effects of teargas inhalation.

Palestine TV reported that several armored Israeli military jeeps invaded many neighborhoods in Nablus city, and fired live rounds, as well as rubber-coated steel bullets and gas bombs at several youngsters who had taken to the street to protest the invasion by throwing stones at the soldiers.

The TV station added that the soldiers shot its reporter, Bakr Abdul-Haq, 29, with a rubber-coated steel bullet in his leg, before he was rushed to Rafidia governmental hospital.

The soldiers also shot one medic of the Palestinian Medical Relief, identified as Yassin Omran,  with a rubber-coated steel bullet in his face.

The soldiers also surrounded Palestine TV reporters and many other journalists, to prevent them from documenting the invasion and assaults.