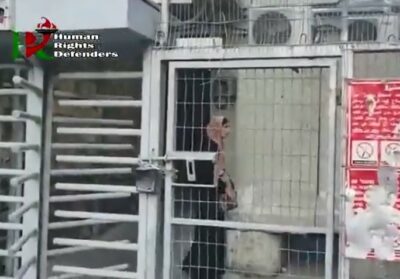 Media sources said the soldiers shot the Palestinian, Mohammad Qawasma, from a close range, wounding him in the leg, while trying to convince them to release Zamzam Yahia Qawasma, 17.

The soldiers also fired several concussion grenades at nonviolent activists of the Human Rights Defenders Coalition and forced them to leave to prevent them from filming the unfolding events.

The Israeli army claimed Zamzam ‘carried a knife’ in her bag and moved her to an interrogation facility in the illegal Kiryat Arba colony in Hebron.

On Tuesday, she was transferred to HaSharon prison and was placed under interrogation ahead of a court hearing scheduled for this coming Thursday.

The soldiers also invaded the nearby Bab az-Zawiya, forcing the Palestinian shops to close.