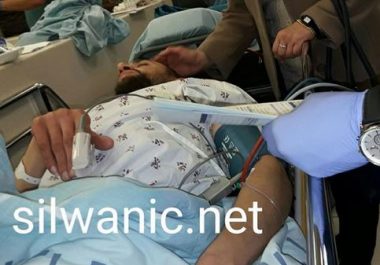 Several Israeli army jeeps invaded, on Tuesday evening, the town of al-‘Isawiya, in the center of occupied East Jerusalem, and shot a young man with a rubber-coated steel bullet.

Mohammad Abu al-Hummus, a member of the Follow-Up Committee in al-‘Isawiya, told the Wadi Hilweh Information Center in Silwan (Silwanic) that the soldiers invaded the town, and randomly fired gas bombs and rubber-coated steel bullets, wounding a young man, identified as Mustafa Amer Mustafa, 28, while standing in front of his restaurant.

The young man lost consciousness, and was rushed to a local clinic, before he was moved to a hospital in occupied Jerusalem.

Abu al-Hummus added that the soldiers stopped the ambulance while leaving the town, and took the ID card of the wounded Palestinian.

In related news, the soldiers invaded the al-Khader town, south of Bethlehem, before stopping and searching many Palestinians.

Local sources said several youngsters then threw stones at the invading soldiers, and that the army fired rubber-coated steel bullets and gas bombs.