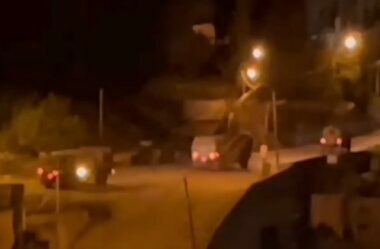 On Saturday dawn, Israeli soldiers shot a young Palestinian man in Nablus, in the northern part of the occupied West Bank.

Media sources said several armored military jeeps invaded the city, especially the Old City of Nablus before the soldiers stormed and ransacked many homes and stores.

During the invasion, the soldiers detained several young men but released them after a few hours of interrogation.

Many Palestinians protested the invasion before the soldiers fired live rounds, rubber-coated steel bullets, and gas bombs, wounding a young man with a live round in the leg.

Medics of the Nablus branch of the Palestinian Red Crescent Society (PRCS) rushed the wounded young man to a hospital in Nablus, where his condition was described as stable.

Also, Palestinian resistance fighters exchanged fire with the Israeli soldiers in the Old City and several parts of Nablus.