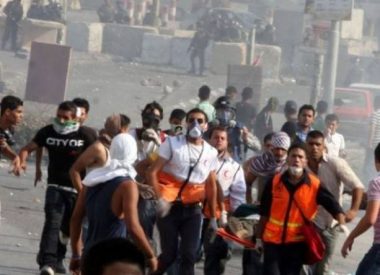 Israeli soldiers shot, Monday, a young Palestinian man, after the army assaulted protesters near the western entrance of Birzeit University, in Birzeit, north of Ramallah in central West Bank.

Medical sources said the young man was shot with a live round in his abdomen, and was rushed to a local hospital, while several others received the needed treatment for the effects of teargas inhalation.

Furthermore, the soldiers invaded al-Mazra’a al-Gharbiyya village, near Birzeit University, and fired many gas bombs and rubber-coated steel bullets, in addition to installing a military roadblock.