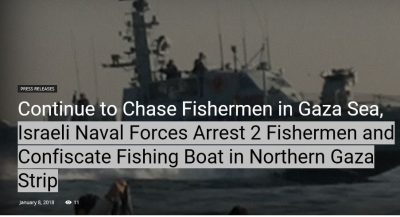 The Palestinian Center for Human Rights (PCHR) monitored the escalation of Israeli attacks against fishermen in the Gaza Sea, in addition to the continuous shooting and shelling against them since 06:00 on Monday morning, despite sailing within the allowed fishing areas.

The Israeli gunboats then surrounded a fishing boat belonging to Mohamed Omar al-Najjar. The fishing boat was manned by Jehad Suhail Murad (25) and Mostafa Mohamed Murad (18), both of them are from al-Shati’ refugee camp in Gaza City.

The Israeli naval soldiers then forced them to take off their clothes, jumped into the water and swim towards the Israeli gunboat.  The fishermen were then arrested while the boat was confiscated.

In light of the above, PCHR strongly condemns the Israeli ongoing attacks against Palestinian fishermen in the Gaza Strip and calls for: