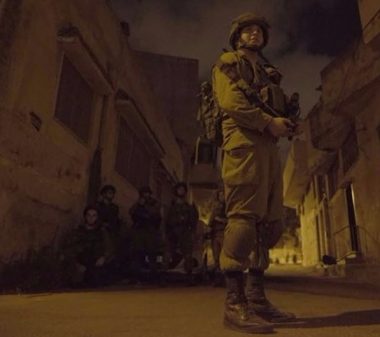 The Palestinian Prisoners’ Society (PPS) has reported that Israeli soldiers abducted, on Monday at dawn, at least 16 Palestinians, including children, in several parts of the occupied West Bank, including Jerusalem.

The PPS said the soldiers carried out massive invasions into many communities in the West Bank, stormed and violently searched dozens of homes, before abducting at least sixteen Palestinians.

The soldiers also interrogated many Palestinians, installed roadblocks, and examined the ID cards of scores of Palestinians, while searching them, their homes and cars.

It is worth mentioning that the abducted lawyer, Emad al-Faqeeh, is the brother of Omar al-Faqeeh, who was killed by Israeli army fire on October 21, 2015.

|Soldiers Abduct A Lawyer And A Child In Jerusalem|

| Soldiers Confiscate 2000 Books And Research Documents From Detainees In Hadarim|