Soldiers Abduct A Lawyer And A Child In Jerusalem 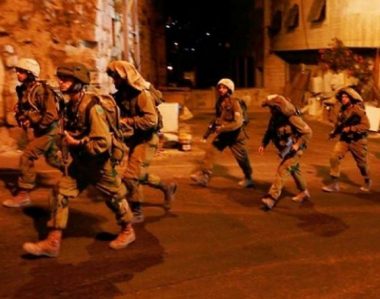 Israeli soldiers abducted, on Monday at dawn, a Palestinian lawyer, and a child, after invading their homes and violently searching them, in occupied East Jerusalem.

The soldiers invaded Qotna town, northwest of Jerusalem, searched homes and abducted a lawyer, identified as Emad al-Faqeeh, before taking him to an interrogation center.

The lawyer is the brother of Omar al-Faqeeh, who was killed by Israeli army fire on Tuesday, October 21, 2015.

In related news, the soldiers invaded Be’er Ayyoub neighborhood, in Silwan town, south of the Al-Aqsa Mosque in occupied Jerusalem, and abducted a child, identified as Mahdi Mofeed Khasour, only twelve tears of age, from his home.