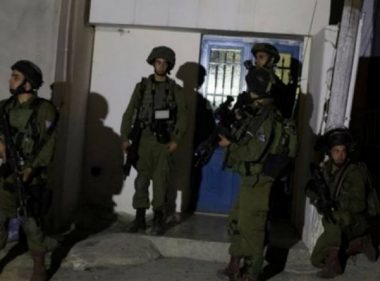 Israeli soldiers detained, Monday, a young man for several hours in Sa’ir town, northeast of Hebron, and invades nearby towns, in addition to installing many roadblocks, before stopping and searching dozens of cars.

Media sources in Hebron said the soldiers invaded homes in Sa’ir town, and abducted Zeid Mousa al-Arameen, but released him several hours later, before withdrawing from the town, due to his bad health condition.

The soldiers also invaded many neighborhoods in Yatta, Bani Neim and Beit ‘Awwa towns, and installed many roadblocks, in several areas, including Zeef, northeast of Yatta, and Farsh al-Hawa, northwest of Hebron city, before stopping and searching dozens of cars, and interrogated many Palestinians while inspecting their ID cards.

On Monday at dawn, the soldiers abducted a Palestinian lawyer, and a child, after invading their homes and violently searching them, in occupied East Jerusalem.