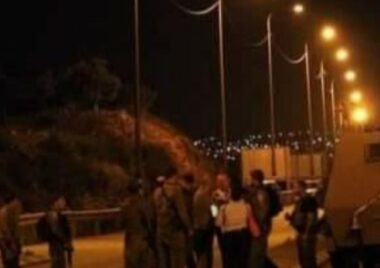 Israeli soldiers shot, on Monday evening, a young Palestinian man near the Annexation Wall, west of Jenin, in the northern part of the occupied West Bank.

Media sources said the young man was walking on Palestinian lands near the Annexation Wall in Aneen village, west of Jenin when the soldiers opened fire at him for “approaching the wall.”

They added that, after shooting the young man, from Silat al-Harithiya village, northwest of Jenin, the soldiers also assaulted him despite his wounds, before leaving the area.

Palestinian medics were called to the scene and transferred the wounded young man to Khalil Suleiman governmental hospital, in Jenin city.