Army Transfers Corpse Of Slain Palestinian Doctor To His Family 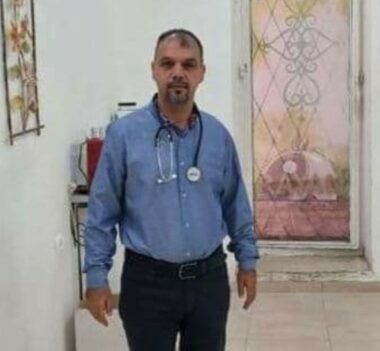 The Israeli army transferred, on Monday at night, the corpse of a Palestinian doctor who was killed by the soldiers, on September 10th, 2021, back to his family for burial.

The family’s attorney Khaldoun Najm said the army transferred the corpse of Dr. Hazem al-Jolani, 50, to the Police Headquarters in Sheikh Jarrah neighborhood in occupied Jerusalem, before the family took it to the al-Makassed Hospital, in the city. He added that the family held the funeral ceremony with the participation of only 38 family members due to Israeli restrictions before he was buried at the al-Yousifiyya cemetery.

The army prevented other Palestinians, including journalists, from attending the burial ceremony, after surrounding and isolating the entire area.

It is worth mentioning that Dr. Hazem was killed by Israeli soldiers near Bab al-Majles (The Council Gate) in the Old City of occupied Jerusalem after the army claimed that he “attempted to stab a soldier.”