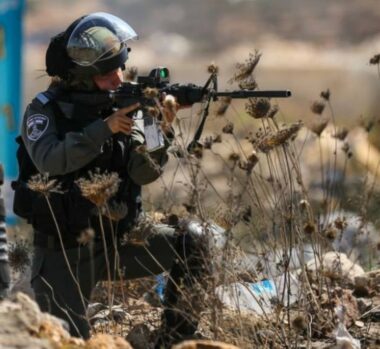 Medical sources said the soldiers shot Saher Fuqaha’, 22, with three live rounds in the thigh and pelvis, causing moderate to serious wounds, before he was rushed to the Istishari Hospital in Ramallah.

Surgeons performed an urgent surgery on the wounded young man to stop the excessive bleeding, before performing a second injury to treat him for the damage caused by the bullets.

After shooting Fuqaha’, the soldiers also detained another young man for a few hours before releasing him.

Nizar Fuqaha’, the uncle of the wounded young man, said Saher and some of his friends were driving near a Palestinian agricultural hothouse near colonialist Road #60 not far from Sinjil before the soldiers opened fire at them without a warning.

Also on Friday evening, the soldiers abducted a former political prisoner, and detained four others, at the Dothan military roadblock near Ya’bad town, south of the northern West Bank city of Jenin.