Israeli Soldiers Shoot A Palestinian With Special Needs Near Jerusalem 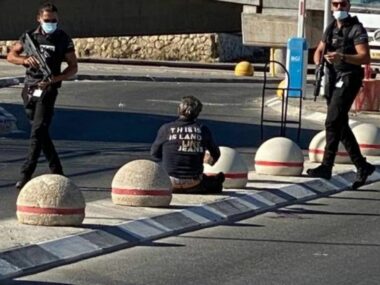 Eyewitnesses said the soldiers fired live rounds at the man, 60 years of age.

The army later said the Palestinian was not carrying any weapon, and that he was moved by an Israeli ambulance to a hospital in Jerusalem.

The wounded Palestinian had a hearing and speech impairment; he approached the terminal on foot in a lane that is only meant for vehicles and was shot in the lower limbs after he did not heed to the soldiers’ demands to stop.

Only after shooting him, the soldiers realized he couldn’t hear of speak.

After the shooting incident, the soldiers closed the terminal on both directions, and forced the Palestinians away, before reopening him later.

On May 30, 2020, the Israeli police shot and killed Eyad al-Hallaq, 32, an unarmed, autistic Palestinian man in Jerusalem. The police then left him lying on the ground with multiple gunshot wounds for over an hour until he bled to death.