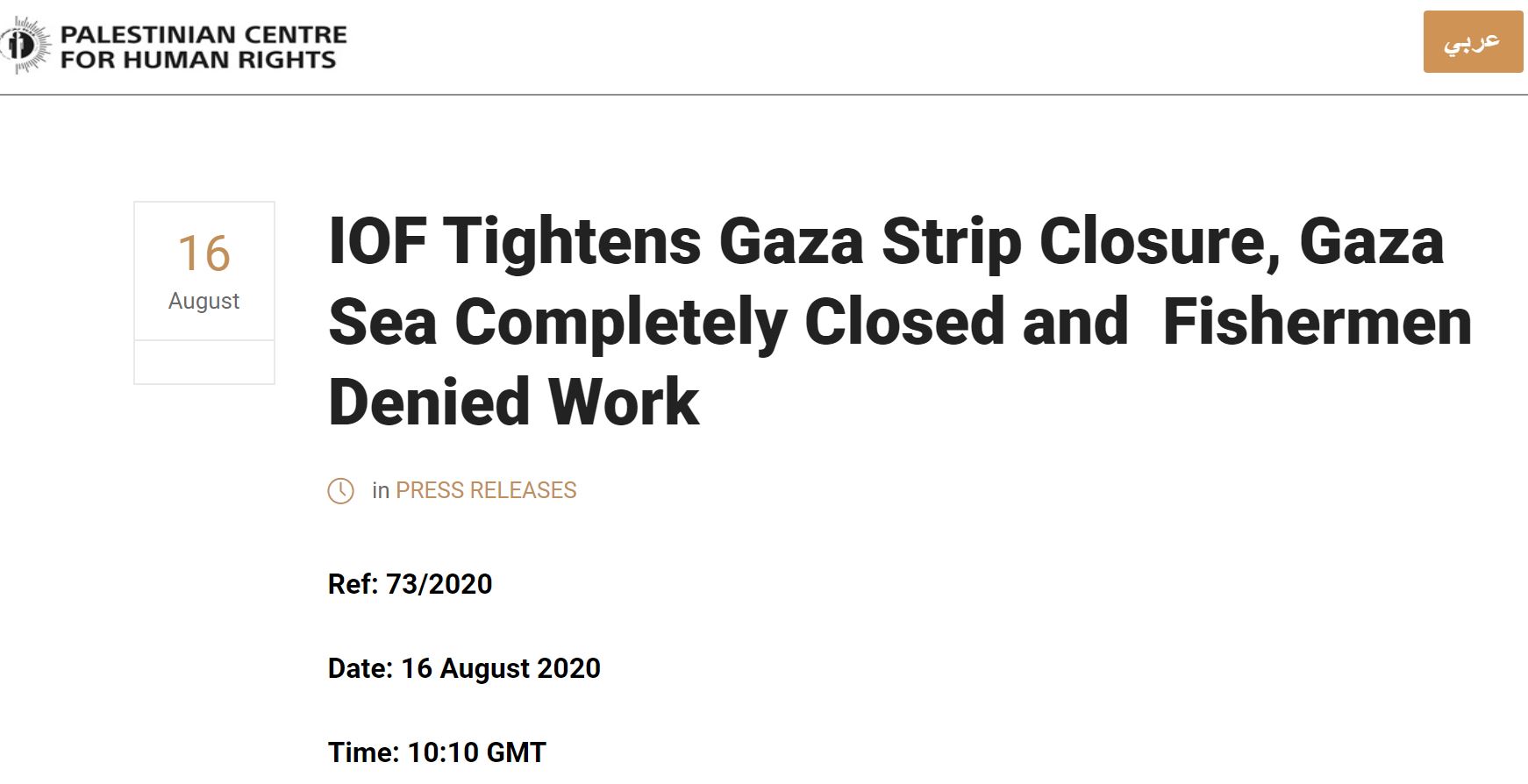 The Palestinian Center For Human Rights (PCHR): On Sunday morning, 16 August 2020, Israeli authorities announced complete closure of the Gaza sea, allegedly in response to the launch of incendiary balloons towards Israeli settlements adjacent to the Gaza Strip. The Israeli Coordinator of Government Activities in the Territories (COGAT), declared the immediate and complete closure of the Gaza Sea, starting from Sunday morning until further notice.

This decision followed the Israeli authorities’ former decisions to reduce the fishing area from 15 to 8 nautical miles issued three days ago and to close Karm Abu Salem crossing issued five days ago, except for the transportation of goods for vital humanitarian cases and fuel.

Since today’s morning, Israeli gunboats chased Palestinian fishermen and opened fire at them while sailing within 1.5-3 nautical miles off the Gaza Strip shore, forcing them to flee and stop fishing.

The livelihoods of 4,160 fishermen and 700 workers in professions associated with the fishing sector; the main providers for their families (a total of 27,700 persons) are threatened with further deterioration with the Israeli authorities’ decision to completely close the sea and deprive fishermen from practicing their job freely.

Even before this decision,  Gazan fishermen already suffered an inability to fish and sail freely in the allowed fishing area due to the recurrent Israeli attacks at sea, the entry ban of equipment and necessary supplies for fishermen. Consequently, hundreds of fishermen are effectively unable to provide their families’ basic needs, such as food, medicine, clothing, and education.

Furthermore, the impact of the new Israeli decisions would deepen the humanitarian and living crises in the Gaza Strip, especially raising unemployment, poverty, and food insecurity. Statistics pre-recent restrictions indicate a dangerous unemployment rate at 46%, i.e. 211,300 unemployed workers; this rate is highest among youth at 63%.

PCHR believes that these decisions fall under the framework of the complete, illegal, and unhumanitarian closure policy imposed by the Israeli authorities on the Gaza Strip since June 2007. PCHR asserts that the complete closure of the Gaza Sea is a form of collective punishment and an act of revenge against Palestinian civilians.