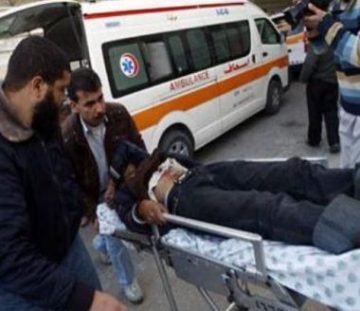 Israeli soldiers shot, and injured, Wednesday, a Palestinian worker near a military roadblock, east of the West Bank city of Bethlehem, while trying to enter occupied Jerusalem.

The Palestinian Red Crescent said the soldiers shot Ahmad Radayda, 27, in his left thigh, and later handed him to its medics before he was moved to Beit Jala governmental hospital, in Bethlehem, suffering a moderate injury.

Eyewitnesses said Radayda was shot in Wadi Abu al-Hummus area, and was on his way to his work, in occupied Jerusalem.

On Wednesday at dawn, the soldiers abducted 19 Palestinians, during extensive invasions and violent searches of homes, in different parts of the occupied West Bank, the Palestinian Prisoners’ Society (PPS) has reported.

Also at dawn, the soldiers invaded Deheishe refugee camp, south of the West Bank city of Bethlehem, and shot five Palestinians, including one who suffered a head injury, in addition to abducting a former political prisoner, identified as Morad Zaghari.