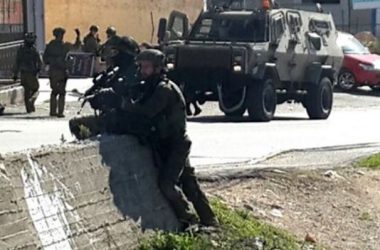 Israeli soldiers invaded, on Wednesday morning, Sateh Marhaba area in the al-Biereh city, and the al-Am’ari refugee camp, south of al-Biereh, in the central West Bank governorate of Ramallah and al-Biereh, injured seven Palestinians, including a woman, before abducting her son, who is reportedly involved in the death of an Israeli soldier in late May 2018.

The PRCS said two Palestinians were shot with rubber-coated steel bullets in the legs, and one in his abdomen, in addition to one resident who was injured by shrapnel from a bullet.

It added that local medics provided the wounded Palestinians with the needed first aid, before rushing them to nearby hospitals for further treatment.

The said that Abu Hmeid is suspected in of killing Sgt. Ronen Lubarsky, a soldier with the Israeli army who was seriously injured during an invasion into the refugee camp, after a Palestinian dropped a marble slab on his head, and died from his serious wounds three days later.

It is worth mentioning that the soldiers also injured Islam’s mother, before Palestinian medics rushed her a local hospital. The woman was wounded after the soldiers attacked her and throw a gas bomb at her.

The military is still operating in the al-Am’ari refugee camp, deployed more vehicles on all its entrances and completely isolated it.