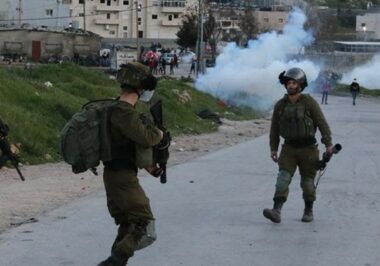 On Thursday morning, Israeli soldiers shot three Palestinians and caused scores, including children, to suffer the effects of tear gas inhalation, In Doura town, south of Hebron, in the southern part of the occupied West Bank.

The Health Ministry said the soldiers shot three young men with live fire in the lower extremities and added that the three received the needed treatment and were hospitalized. Their wounds have been described as stable.

The Palestinians were injured when the soldiers attacked protesters in the town and fired many live rounds, rubber-coated steel bullets, and gas bombs.

Dozens of Palestinians, including several children, suffered the severe effects of teargas inhalation before receiving the needed treatment, while some of them were hospitalized for further checkups.

It is worth mentioning that a general strike was declared in Hebron and other parts of the West Bank to mourn the four Palestinians who were killed during the Wednesday Israeli offensive in Jenin, in the northern West Bank.

On Wednesday evening, Israeli soldiers shot eight Palestinians and caused dozens to suffer the effects of tear gas inhalation in Beit Ummar town, north of Hebron, in the southern part of the occupied West Bank.