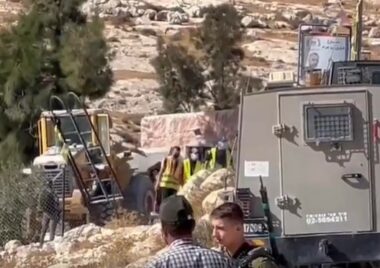 On Thursday, Israeli soldiers demolished a mobile home in the Farsh Al-Hawa area, west of Hebron, in the southern part of the occupied West Bank.

Rafat Ishaq Nasser-Eddin said the soldiers invaded his mobile home and ransacked it, in addition to destroying its furniture and belongings.

He added that the soldiers did not allow him to remove anything from his property before demolishing it.

The Palestinian lived in the mobile home on land he owns and has all official deeds proving ownership.

Hebron’s various communities, especially in Yatta and Masafer Yatta, have been subject to seriously escalating Israeli violations, assaults by the occupation army, and the illegal colonizers, especially after the army declared massive areas of Palestinian lands as “training zones.”