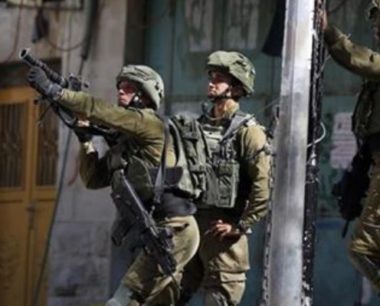 Israeli soldiers shot, on Tuesday evening, two young Palestinian men, and caused many others to suffer the effects of teargas inhalation, after the army invaded the al-Mazra’a al-Gharbiyya village, north of the central West Bank city of Ramallah.

They added that dozens of soldiers invaded the village from several directions, after surrounding and isolating it.

Medical sources said the soldiers shot a young man with a rubber-coated steel bullet in his chest, and another Palestinian with a gas bomb in his back, and caused many Palestinians to suffer the effects of teargas inhalation.

In related news, the soldiers invaded Hizma town, east of occupied East Jerusalem, and shot a young man with a live round in his left leg, during protests that erupted following the invasion.